This global E Alu Pū gathering started with the greeting of the many familiar faces, then from across the courtyard we received simultaneous requests to be welcomed by unfamiliar ones. Though unacquainted with the faces, the sounds and modulation of those sounds were all too familiar. The compositions of different languages, various intonations, and breaks resembled those found in our own aboriginal expressions. Our brother from Papua New Guinea had shown his intensity through the timbre of his vocalizations. This was something I could only understand through speculation: was this sort of vocal projection the norm in his culture? were they intensified because of the rigors of life or determination to mālama his home through adversity and hardship? My very first E Alu Pū is best reflected on through the consideration and conveyance of my auditory experiences.

Between small group discussions and dialogue, excursions, presentations and workshops we had time to eat and relax together. This is where I believe we had a chance to formally meet and greet our guests, but also where we had important and intimate conversations about where we come from, our journey, and work and why we do what we do. Our friends from Vanuatu, while on their way to Hawai‘i, had no choice but to spend a week in Fiji because of international red tape. I could see the weariness on their faces and in the tilting of their heads, but when they spoke they inspired and captivated me. Some of our international friends told stories, some ancient and others contemporary, and we reciprocated. Malagasy (Madagascar) and Maori (Aotearoa) cousins shared songs, again some were ancient and others contemporary, and we reciprocated. These satellite exchanges seemed to have drawn us in much closer than we expected. So close in fact that in the telling of some stories one could hear the flutter and cracks in the voice of the orator and so I assumed one thing – the kuleana was great. 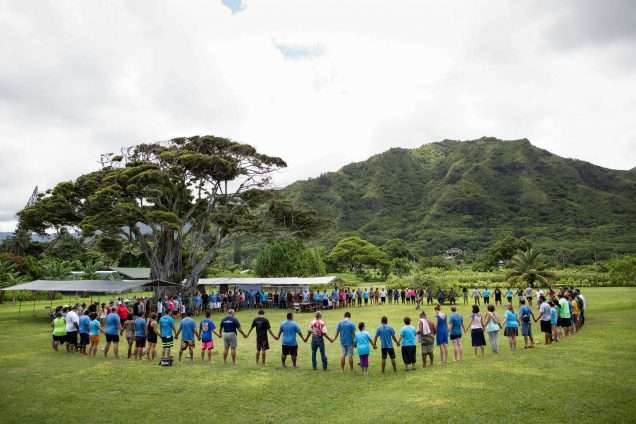 Kuleana is a word we often use when speaking of someone’s responsibility – and the privilege to have that responsibility. The burden of responsibility is at times overwhelming, as many of us know, but I often feel kuleana as an ‘ume, or pull, that directs and assists me in all the important decisions to be made and work to be done. Using an indigenous ear, I gathered that any sort of fumble or flight in speech was because a deep sense of pride. They were proud to showcase their kuleana, fortunate to be in the presence of so many allies, and honored to be included in such important discussions.

When we transitioned out of the camp the reality of the World Conservation Congress didn’t hit me, the gravity of it didn’t affect me until we arrived at the Neal S. Blaisdell Arena. I sat with the global E Alu Pū ‘ohana and silently shared a sentiment: we were incredibly honored to be a part of the group that will carry this great ‘auamo onto the world stage – IUCN’s World Conservation Congress. As opening ceremonies were set to begin we raised our voices reciting the lines of ‘oli e alu pū: “E ala ē, E alu pū!”. This was a call to everyone, not just the E Alu Pū network, but every single participant and member to arise and move forward together.

As I return to regularly scheduled kuleana, I remain inspired by the many visionaries – near and far. I’ve never heard the concept of aloha ‘āina expressed in so many ways. I’ve never heard the importance of abundance for future generations expressed in so many ways. I reflect on the stories I heard and lessons learned but mainly concentrating on the metacognitive practice: with so many similar, yet diverse ways, of viewing the world, conservation, and kuleana I hope that, one day, I will be able to communicate these complexities in my work. My participation in E Alu Pū, and the World Conservation Congress, has allowed me to grow my network beyond what I thought was possible and reconnect with friends working on other islands. Everyone’s efforts and struggles remind me to stay active: if I am not actively helping to replenish abundance, of natural and cultural resources, then I am essentially contributing to its decline. The purpose and importance of such a gathering ensures that its value and influence will continue to be heard throughout the world; its cultures, industries, and people. My heart is impassioned and my mind stimulated. Mahalo to the global E Alu Pū ‘ohana, KUA, Kevin, Alex, Brenda, and everyone else who helped to provide this space for all of us.