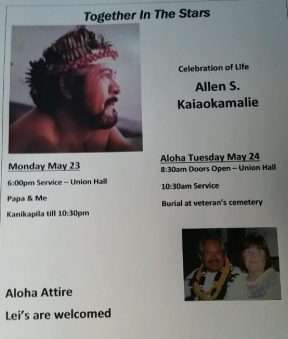 Uncle Allen Kaiaokamalie spent alot of time at Keomoku, Maunalei Ahupua’a where he had his “limu farm” as he called it. It turned out to be an appropriate name for that place because he became very successful at growing ogo in open ocean cages. Early attempts to grow limu in this manner ended with frustration. Honu (turtles) and sometimes the twolegged predators (Homo sapiens) would get into his cage and take all the limu. Through trial and error he designed and constructed a much more secure limu cage that kept these predators out. His new cage design met with great success. He had a big smile on his face when the cage was brought to shore an opened up to reveal how much the limu had grown in six weeks. 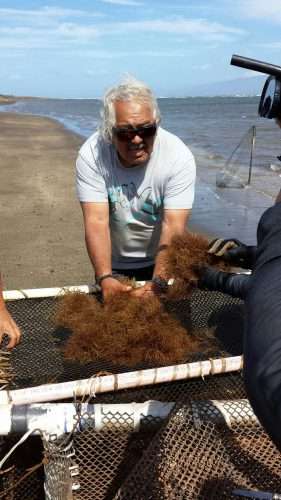 The whole purpose of this limu farm was to grow limu to be planted along the Keomoku shore line to providefood for fish and for his community. This farm was also a way for Uncle Allen to pursue his passion to reconnect the youth of Lanaʻi with the ocean and to teach them to malama their natural resource.

Uncle Allen had such a kind and generous heart. He gave a lot of his time and his own money to his project but was reluctant to take any type of compensation for himself.

Uncle Allen was a charter member of KUAʻs Limu Hui. This year’s Third Annual Limu Hui Gathering will take place at his limu farm. He was so looking forward to hosting our June 17 to 19 Limu Hui Gathering. He was eager to show the limu growing tanks but he was so much more anxious to show the success of his floating cage. Two more cages were recently added for a total of three and there are plans to expand even further.

Unfortunately Uncle Allen suffered a heart attack at his farm on Friday, April 22 and was medivaced to Tripler Army Medical Center. He passed away the next evening, Saturday, April 23 around 9:00 PM.

Uncle Allenʻs celebration of life will be held on Tuesday, May 24, 2016, 10:30 am at the Lanaʻi City Union Hall. Doors will open at 8:30 am. Burial at the Veteranʻs Cemetary to follow. Everyone is invited to spend that evening at his beloved limu farm in Keomoku, Mauanalei Ahupua’a for food and kanikapila.

The evening before his service, Monday, May 23, there will be a remembrance of his life from 6:00 to 10:30 PM at the Lana’i City Union Hall.

Letters and cards of condolence can be mailed to: 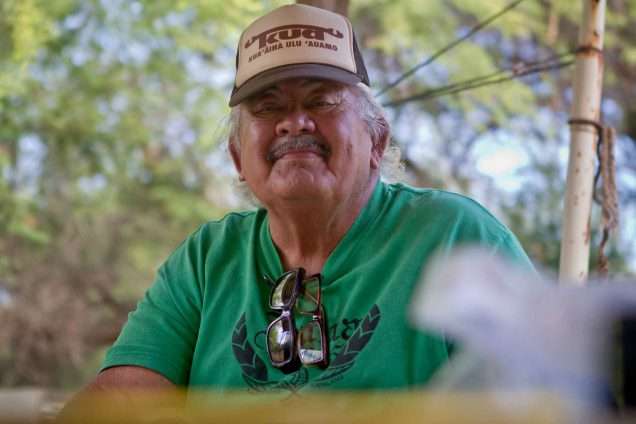 Aloha my friend. Rest peacefully. You did good.