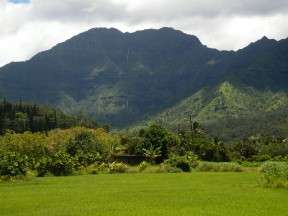 KUA Board Vice President and E Alu Pū member, Makaʻala Kaʻaumoana of the Hanalei Watershed Hui is a 2015 National Wetlands Award “Wetland Community Leader” recipient and will be recognized in Washington, DC on May 21st.

(Washington, DC) — The Environmental Law Institute (ELI) is announcing the recipients of the prestigious National Wetland Awards. For 26 years, individuals from across the country have been recognized for their exceptional and innovative contributions to wetlands. “Dedication, perseverance, and excellence mark the common attributes of the extraordinary individuals recognized as this year’s National Wetlands Award winners,” stated ELI Acting President Scott Schang. “Wetlands protection and restoration only occur when exemplary leaders in all areas of service—scientists, educators, government officials, private landowners, community advocates, and conservationists—work to achieve a common goal. With our federal agency partners, we salute these individuals and their skillful efforts to protect and restore wetlands for the good of people, places, and the planet.”
The program is administered by ELI and supported by the U.S. Environmental Protection Agency, U.S. Fish and Wildlife Service, Natural Resources Conservation Service, U.S. Forest Service, NOAA Marine Fisheries Service, and the Federal Highway Administration. “We look forward to meeting this year’s award winners and honoring their extraordinary achievements in wetland conservation,” said Eileen Sobeck, assistant administrator for NOAA Fisheries. “We are proud to support the Environmental Law Institute’s National Wetlands Awards, and recognize individuals for their contributions to society and the aquatic environment. Wetlands provide essential support for self-sustaining ecosystems, valuable fisheries and protected resources, water quality and resilient coastal communities.”

The 2015 National Wetlands Awards recipients will be honored at a ceremony on May 21, 2015 at the U.S. Botanic Garden from 6-8pm. The winners of the U.S. Ramsar Wetlands Photo Contest will also be announced and displayed at the ceremony. The public is invited to attend (click here to RSVP or visit www.nationalwetlandsawards.org). This year’s award categories and recipients are:

As the founder of Wetlands Restoration and Training, LLC, and the Center for Wetland and Stream Restoration in Morehead, Kentucky, Thomas R. Biebighauser has created and restored over 300 wetlands since his retirement from the U.S. Forest Service in 2013. A wetland ecologist and wildlife biologist, Thomas designs and teaches numerous workshops, training sessions, and college-level courses on wetlands restorations—his restoration techniques, which includes pioneering the use of groundwater dams, have been replicated by over 10,000 students, biologists, land manager, engineers, and private land owners. He has also authored numerous instructional books and articles on wetlands restoration.

A program manager at Iowa State University, Dr. Jacqueline Comito has been instrumental in bringing creative and engaging water education programs to Iowa. Since 2005, she has partnered with numerous state organizations and federal agencies to help implement the Iowa Learning Farms, a state-wide conservation demonstration and outreach program to promote water conservation. In 2013, she developed and launched Water Rocks!, and entertaining and engaging youth water education program, which has utilized art and science to teach over 15,000 youth about the importance of water and wetlands. She also oversaw the development of a fleet of three interactive, mobile learning centers called “Conservation Stations,” which have attended 389 events and engaged 51,000 people in natural resource education.

A senior scientist and aquatic ecologist with the Cary Institute of Ecosystem Studies in New York, Dr. Stuart E.G. Findlay has conducted over 25 years of research on the Hudson River, benefitting the 10 million people who depend on the river for drinking water and recreation. He was instrumental in the creation of the Hudson River Environmental Conditions Observing System and designed an interpretive display at the Hudson State Historic Park that is visited by nearly 500,000 people annually. He has contributed to over 100 papers on freshwater ecology and restoration and serves on the advisory committees for the New York Department of Environmental Conservation, NOAA’s Research Reserve, and EPA.

As the director of the Virginia Department of Environmental Quality’s (VDEQ) Office of Wetlands & Stream Protection, David L. Davis has played an essential leadership role in the evolution of Virginia’s wetlands program over the past 16 years. In 2000, he was nominated to serve on VDEQ’s Technical Advisory Committee to draft regulations implementing new state wetland laws. A year later he joined the staff as a wetlands ecologist and, in 2006, became the director. He has worked with the U.S. EPA and U.S Army Corps of Engineers to ensure that Virginia has a seamless state-federal wetland regulatory program. Today, Virginia’s wetland program has evolved to become one of the most comprehensive in the country and is recognized as a model for other states.

Owners and operators of Hardwick Planting Company and Somerset Plantation in Newellton, Louisiana, Mary and Jon “Jay” Hardwick are dedicated to achieving and promoting balanced farm ecosystems that are both productive and sustainable. They have restored over 450 acres of wetlands on their 20,000-acre family farm, including taking sensitive land out of production along Bayou DuRosset. They have partnered with numerous state and federal agencies to promote sustainable agriculture and conservation methods. The Hardwick’s farm regularly hosts educational tours and workshops, utilizing their farm as a model to demonstrate wetland restoration, crop science, and conservation techniques to the public.

Located on Hawai’i’s island of Kaua’i, Barbara “Maka’ala” A. Ka’aumoana is the executive director of the Hanalei Watershed Hui, a community-based, nonprofit focused on the stewardship of the Hanalei Bay watershed. For over 20 years, her work has highlighted the connections between upland, wetland, and near shore resources critical to the subsistence, recreational, cultural, and economic needs of the community. She facilitated the collaboration of community, government, and private sector in the development of the Hanalei Watershed Action Plan and advocated for a community-led process for research and planning. The iconic Hanalei river valley encompasses nearly 350 acres of wetland impoundments that produce over 80% of Hawaii’s taro production and provide critical habitat for five species of Hawai’i’s endangered wetland birds. She has engaged the community in stewardship through the development of a Watershed Management Plan, a Makai (ocean) Watch program, a Community Disaster Resilience Plan, a mobile science/education van, and the annual publication of the Hanalei Moon and Tide Calendar.

Environmental Law Institute (ELI) coordinates the awards program, while our federal agency supporters provide financial support, serve on the selection committee, and/or participate in the ceremony. Every year, ELI recognizes excellence across a broad spectrum of areas of environmental law, policy, and management, both domestically and internationally. Honorees are typically individuals, but in some instances have been governments and institutions. By honoring exemplary service and achievement, ELI highlights the direct link between individual and collective actions and better environmental, economic, and social outcomes.