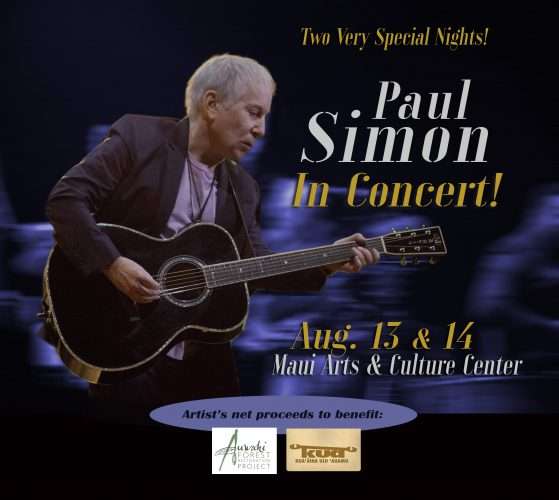 “The words of the prophets are written on the subway walls and tenement halls and whispered in the sounds of silence.” – Paul Simon, Sound of Silence

Kuaʻāina Ulu ʻAuamo (KUA) is deeply honored by legendary singer-songwriter Paul Simon’s recent announcement of his intention to donate net proceeds from his upcoming special concerts at the Maui Arts & Cultural Center (MACC) on August 13 & 14, 2019.   Proceeds will go to KUA and the Auwahi Forest Restoration Project to support biodiversity conservation and ʻāina momona—rich and abundant land and waters that support community well-being.

“Mr. Simon’s songs and voice have helped shape a generation of people including participants in the networks we facilitate. My friend, musical inspirator,former board member, and celebrated and loved Hawaiian musician Ernie Cruz Jr. belonged to that generation. My mom too,” said KUA Co-Director Kevin Chang.

“Mr. Simon’s music was a mainstay on the record player of my youth. Before Ernie passed in September 2016 we had hoped to put together a KUA musical roadshow to tell the story of Hawai’i, its history and communities. Music uplifts and enhances human feelings and connections, especially those around relationships. In our case, it also strengthens our desire to care for Hawai’i and its unique environment and culture. Ernie embodied  this spirit. When I think of Mr. Simon’s generous gift I think of how music itself is literally a movement and how inspired Ernie would have been by this act. On behalf of the KUA Board, the networks and the work KUA was created to uplift, we are tremendously grateful,” added Chang

Proceeds from Mr. Simon’s concerts will go towards KUA’s general operations. His generosity will enhance our capacity and flexibility to better connect and empower those who carry on a tradition of community-based natural resource management in Hawaiʻi.

KUA Co-Director Miwa Tamanaha expressed her gratitude for the fact that Mr. Simon was drawn to the community dimension of KUA’s work. “Clearly, he is someone who really understands the connection between people and biodiversity, our relationship with land, water, ocean, forest, fish, birds that uplifts and has an impact in creating the abundance we all want to see in Hawaii and the world,” she said.

“Music gives a soul to the universe, wings to the mind, flight to the imagination and life to everything.” ― Plato

“One good thing about music, when it hits you, you feel no pain.” ― Bob Marley

Come stop by KUA’s outreach table at the show to learn more about our work with the grassroots community networks of E Alu Pū, Hui Mālama Loko Iʻa, and the Limu Hui.

Further info can be found HERE at Mr. Simon’s webpage.