(Heʻeia, Koʻolaupoko, Oʻahu) ~ Hui Mālama Loko Iʻa is a growing consortium of fishpond practitioners and stewardship organizations from across Hawai’i.

In February 2020, over 170 indigenous scientists, kia’i loko and grassroots aquaculture practitioners from arounf the Pacific gathered in the ahupua‘a (traditional land division) of He’eia, O’ahu for the 2020 Hui Mālama Loko I’a Annual Gathering. They participated in restoration projects and educatialal huaka’i at fishponds across O’ahu. Read more about it HERE.

Special Mahalo to the amazing crew at Paepae o He’eia, Kāko’o ‘Ōiwi and Papahana Kuaola who hosted our gathering, to the ‘ohana of Pāhonu, Loko Ea, Waikalua Loko, Loko Ea, Loko Pa’aiau, and Kapapapuhi for generously hosting our huaka’i, and to all the 2020 gathering participants, community members, visitors, and extended family for giving your time, gifts, ‘ike (wisdom), energy and commitment to our time together. View the 2020 HMLI Gathering Report HERE:  Link Coming Soon!

Rain puddled at the edges of the large white tent, sporadically spilling over onto the kānaka (people) sitting below.

For the first time, indigenous aquaculture practitioners and researchers from around the world were joining the Hui Mālama Loko Iʻa (Hui) gathering to share knowledge. The plan was to spend four days in the ahupuaʻa (Hawaiian subdivision of land) of Heʻeia camping, eating local foods, working in the ʻāina (land, earth), and talking story. Days before, in preparation for our guests, the Hui cracked Samoan crabs, canned iʻa (fish) and ʻulu (breadfruit) soup, and built shower stalls at our campsite at Kākoʻo ʻŌiwi. As we worked, dark clouds (the color of which I imagine are the same as the rat ʻIolekaʻa Valley is named after) rolled in, hiding the Koʻolau Mountains. And now that over 150 people from 13 tribes and 4 countries were finally together in one place, water fell from the sky in large, continual droplets. Disappointment and annoyance crept in as I worried about how we would keep everyone comfortable. 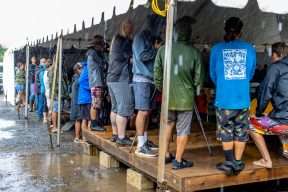 Then during our opening circle, an elder from a Pacific Northwest tribe reminded everyone that the rain is a blessing for the earth and our gathering. A source of life. And we were to be grateful. As she spoke, I watched as strangers and old friends from different climates and cultures huddled tightly together under the tent, as far from the spilling edges as possible. In this moment, I started to understand the interconnectedness and similarities of coastal communities as well as the vast potential for their resilience through the forging of international lessons. For me, this message would further take shape over the next three days. Prior to the gathering, I had valued place-based knowledge, but thought of it as insular silos of communities separated around the world.

I had first learned about this gathering a year prior. I was working at Mālama Loko Ea, and Brenda Asuncion, the Hui Mālama Loko Iʻa Coordinator at KUA, had come to ask if I could help with the invitation list and reach out to the Vezo community I lived and worked with in southwest Madagascar. In their local dialect, vezo means people of the sea. Children spend their days playing with miniature toy versions of pirogues (the community’s traditional double-outrigger wooden canoes that share many similarities with the Hawaiian waʻa (canoe)). In the process, they learn knots and how to read the sea and the sky—a skill I would identify as Hawaiʻi’s kilo (using observation with intention to understand and examine the surrounding world). Men head out daily before sunrise to fish the reef. Women walk miles offshore at low tide to glean the reef flats for horita (octopus) in a ritual that now feels reminiscent of sea gardens in the Pacific Northwest and Aotearoa (New Zealand)—both of which I learned about at the gathering. As for the land, it’s extremely arid and remote in this area of Madagascar, making it challenging to grow crops and import goods. Fish remain the predominant livelihood and food source. Alongside efforts to preserve their lifegiving fish, there is a sea cucumber farm. Their export to China alleviates financial and subsistence pressures from a system of locally-mandated no-take zones and marine protected areas (MPAs) that echo Kaʻūpūlehu’s Fish Replenishment Area on Hawaiʻi Island.

Despite the numerous similarities between Vezo and Hawaiians, my mind struggled to wrap around the idea. I was immediately excited and committed to helping, but even as my pulse quickened and my heart raced in happiness, I worried about what connected Vezo and Hawaiians. Like a loko iʻa, their sea cucumber farm was regenerative, and it didn’t require any external feeds, but it wasn’t a traditional Vezo practice. Did it fall under the same umbrella as loko iʻa? Could their aquaculture and stewardship exchange be meaningful enough to justify the costs and donations needed to fly them around the world?

At the time, my mind couldn’t understand what my naʻau (intuition; literally the intestines or guts, which Hawaiians suppose to be the seat of thought, of intellect and the affections) was telling me. The balance between place-based knowledge and cross-cultural sharing was something Brenda and KUA already deeply understood, and it’s something I had instinctually sought out without knowing what it could be like or how to process its importance. Unfortunately, Vezo were not able to attend, but the same internal tug-of-war resurfaced months later when Brenda told me numerous members from the Clam Garden Network had committed to coming. Excitement swirled with questions. Could there be significant similarities between temperate and tropical systems? Did clam garden practitioners enhance the natural environment to the same degree that Hawaiians do? (At the time I was not aware that clam gardens also have a stone wall.)

Even as I sat on the phone personally and wholeheartedly inviting members from the Tolowa Dee-ni’ nation in California to join our gathering, my mind screamed. Are there meaningful connections between their hatcheries and loko iʻa?

A year later at the gathering, Kalaionamoku Luka Kanakaole Mossman would eloquently verbalize the cross-cultural connection I struggled to identify: “There’s power in water, he said. “And we are all related by this water, as one indigenous people in different areas.” How fitting then that our time together began with rain! As we sat reflecting upon this on our closing day, I remember thinking there are multiple ways to view challenges.

Who could have foreseen that less than a month later, we all would be sheltering at home for an unprecedented virus? COVID-19 challenges us to find blessings in the rain. As I know many of us have, I have often drawn upon the feelings of hope and joy I experienced during our gathering. Amid so much chaos, our union reinforced what we know to be true: the power of ʻāina momona (abundant, productive lands and waters that support community well-being and feed us, physically, emotionally, and culturally) and the importance of reestablishing food sovereignty using traditional knowledge. In a COVID-19–inflicted and climate-threatened world, others are starting to understand how local foods equate to resilience, and I’m proud and hopeful to see the bonds forged during our gathering, as well as a growing community of global cultural aquaculture practitioners, be at the center of this change. 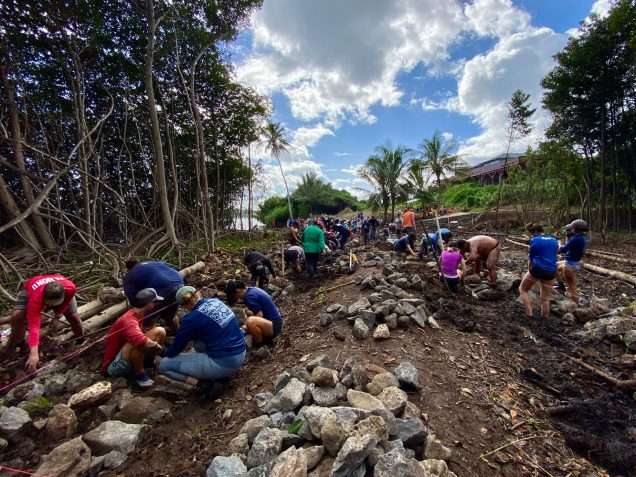 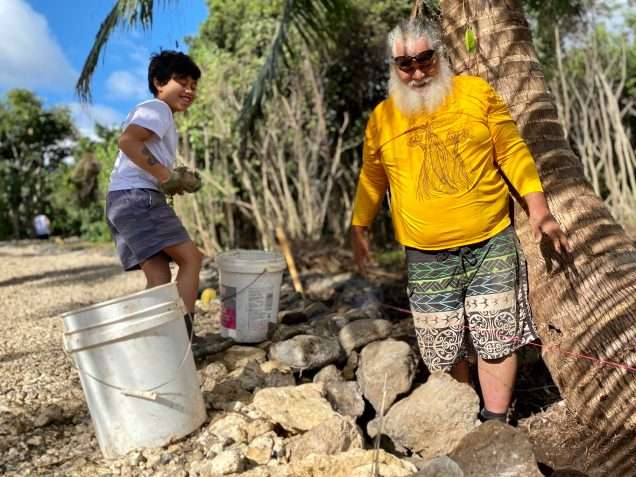 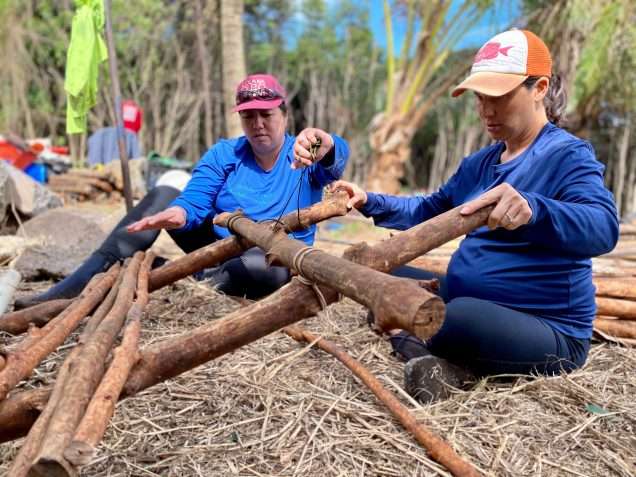 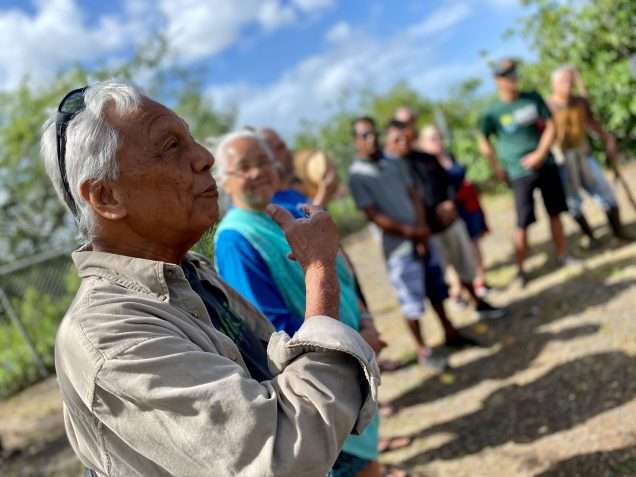 (from top left) Indigenous scientists and grassroots aquaculture practitioners from Hawai’i and across the Pacific helped restore 150 feet of kuapā (wall infrastructure) on a newly-cleared bank at He’eia Fishpond and helped build a new mākāhā (sluice gate); Dr. Emmet Aluli, a lineal descendant of caretakers of Loko Pa’aiau shares with visitors during a huak’ai to the fishpond in Pu’uloa. PHOTO CREDIT: Kim Moa

Amanda Millin is a former food journalist turned sustainable aquaculture enthusiast. She can now be found working at Mālama Pu’uloa in ʻEwa, Oʻahu.