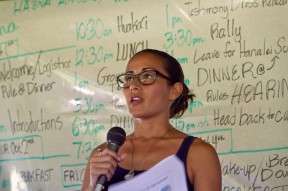 “Shae Kamaka’ala is a young attorney from Kahana, Koʻolauloa, Oʻahu who works with her community and organizations like Hoʻāla ʻĀina Kūpono and the lawaiʻa of her commuity through the Kahana Kilo Kai program to advance co-management and cultural and indigenous justice initiatives in Hawaiʻi. Shae is currently a Marine Legal Fellow at The Nature Conservancy and has been working with other communities who have taken charge of their kuleana to mālama their ahupuaʻa and its finite natural resources.”

I wanted to report back to everyone about Hāʻena’s public hearing Friday, October 3, 2014 at Hanalei Elementary School. The hearing was absolutely beautiful. There was a strong crowd of about 200 in support. Almost every one of us wore a “Support Hāʻena, Lawaiʻa Pono, Fish Hawaiian” shirt which provided a solid visual and sense of solidarity. There were very few (I think three) in opposition and a few with reservations, but the general sentiment was that these rules are ripe for approval, like a Hayden mango on a hot summer day. Those in opposition were given shirts and even encouraged to share testimony.

The ʻohana of Hāʻena testified with their extended ʻohana behind them in support and they testified with a strong sense of aloha for their ʻāina and for the future generations. For my own self, seeing so many families come out and speak out and up for their place from a place of aloha, rather than a place of hurt, showed so much of how strong and resilient the Hāʻena community is. There was representation from all islands (except Niʻihau) and everyone shared something meaningful about this movement to better protect our resources and why they support Hāʻena. It was an extremely beautiful evening and when we got back to the loʻi to celebrate, there was an amazing pō mākole (moonbow) that was arched over Hāʻena…Uncle Keliʻi Alapaʻi said the kūpuna were there with us.

Hanalei School cafeteria during the Hāʻena hearing before the Division of Aquatic Resources. Photo by Kim Moa.

Pō Mākole witnessed the night of the hearing. Photo by Franz Schmutzer.