(Kahaluʻu, Oʻahu, Hawaiʻi) ~ The UN Development Programme has selected two grassroots Hawaiʻi efforts dedicated to the perpetuation of indigenous and local knowledge and community-based conservation for the 2019 global Equator Prize awards. This recognition by the UN Development Programme and its partners honors organizations that have come up with innovative, nature-based solutions for tackling climate change, environmental and poverty challenges using the collaborative power of communities.  The two Hawaiian winners who will split the $10,000 prize are Hui Mālama o Moʻomomi on Molokaʻi, and Hui Makaʻāinana o Makana on Kaua’i. They will join the other winners in New York in September for a week-long summit during the 74th United Nations General Assembly and the awards will take place at a celebratory gala in New York on September 24, 2019.

Hannah Kīhalani Springer a member of the E Alu Pū Network Council and board member of Kuaʻāina Ulu ʻAuamo (KUA) the backbone organization that supports grassroots networks, expressed the profound gratitude and delight of all who have worked diligently for years on land and marine conservation efforts.

“It is very encouraging to everyone to see their efforts lifted up in this way. We are connected to indigenous communities around the world, all doing very important work in the face of tremendous challenges, in some cases, even threats to life, and to the land. To be among the 22 selected from a pool of 847 nominations across 127 countries is an incredible honor,” she added.

Hawaiʻi’s tradition of community-based natural resource management is also important to achieving Hawaiʻi’s Aloha+ Challenge and the Governor’s 30 by30 effective nearshore management initiatives, as well as the United Nation’s Sustainable Development Goals (SDGs).  The leadership of Hawaiʻi and its communities at the 2016 World Conservation Congress has resonated ever since.

Timing is particularly meaningful this week with World Environment Day on June 5, and World Oceans Day on June 8. The selection of the winners was made by an independent Technical Advisory Committee of internationally renowned experts. 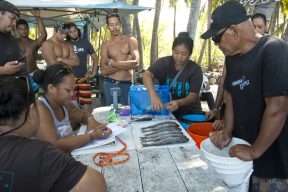 Led by Kelson “Mac” Poepoe, this grassroots initiative has worked for over two decades to mālama (care for) the nearshore fisheries of Moʻomomi, Molokaʻi to ensure that present and future generations of Hoʻolehua homesteaders and the families deeply rooted in the area will be able to live off these resources. Their efforts are designed to maintain subsistence as a viable option in Molokaʻi’s fluctuating economy and to encourage young Hawaiians to learn and perpetuate traditional fishing practices.

In 2003, Mac Poepoe invited traditional nearshore gatherers to come together in an effort that led to the birth of the E Alu Pū (move forward together) network. This statewide rural Native Hawaiian network enables the sharing of challenges, successes and lessons learned in a way that is mutually empowering and has transformed the way communities care for the places they belong to.

The work of the Hui Mālama o Moʻomomi also inspired a statewide law to implement community-based subsistence fishing areas (CBSFA) which enables  communities to co-manage and co-govern natural resources with the government for the purpose of reaffirming and protecting fishing practices customarily and traditionally exercised for purposes of native Hawaiian subsistence, culture, and religion. With the advocacy and support of E Alu Pū and others, the first permanent CBSFA was implemented in Hāʻena, Kauaʻi (see below) in 2015. Moʻomomi currently has its own rule package on Governor Ige’s desk for approval to proceed to public hearings and a number of other CBSFAs are being considered in places such as Kīpahulu (Maui), Miloliʻi and others.

The Hui’s work and careful monitoring of changing patterns in the ocean has informed fish harvesting protocols. Its work has led to miles of beach clean-up efforts with other partners and catalyzed statewide community-based natural resource management (CBNRM) initiatives. 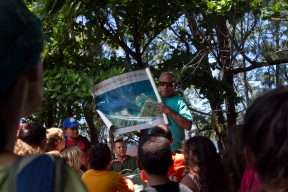 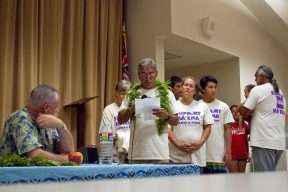 Hāʻena State Park serves as a community hub for Hui Makaʻāinana o Makana, a non-profit organization formed by lineal descendants of the traditional families of the area. Hāʻena is one of the most heavily impacted tourist spots on the island averaging 2,300 visitors daily – over 800,000 a year – because of its beautiful beach, trail and many cultural and historic sites.

For over a decade, and since 2012 under the leadership of Presley Wann and Keliʻi Alapai, the Hui worked on an initiative to partner with the state to implement the first community-based subsistence fishing area (CBSFA) rules that allow for communities and the state to manage nearshore ocean areas together. The marine resources of Hāʻena feed the families of Hāʻena and the sharing of catch between community members, young and old, is a tradition that affirms ties and promotes social cohesion.

The Hui is one of the pioneers in using a non-profit legal structure to advance a place-centered agenda that looks to the history, identity, meaning, ecology, values and people of a place to find emergent solutions to community-identified challenges.

The Equator Prize has the support of several former heads of state, a number of major European governments, thought-leaders like Jane Goodall and Jeffery Sachs, indigenous rights leaders like Vicki Tauli-Corpuz, Conservation International, the Nature Conservancy and other major conservation organizations, and several philanthropists and celebrities.

*A version of this article was published on June 8, 2019 by Big Island Now, “Molokaʻi and Kaua‘i-Based Hui Receive Equator Prize,” and on June 10, 2019 in by Civil Beat, “Molokai, Kauai Groups Recognized For Restoring Sustainable Fisheries,”