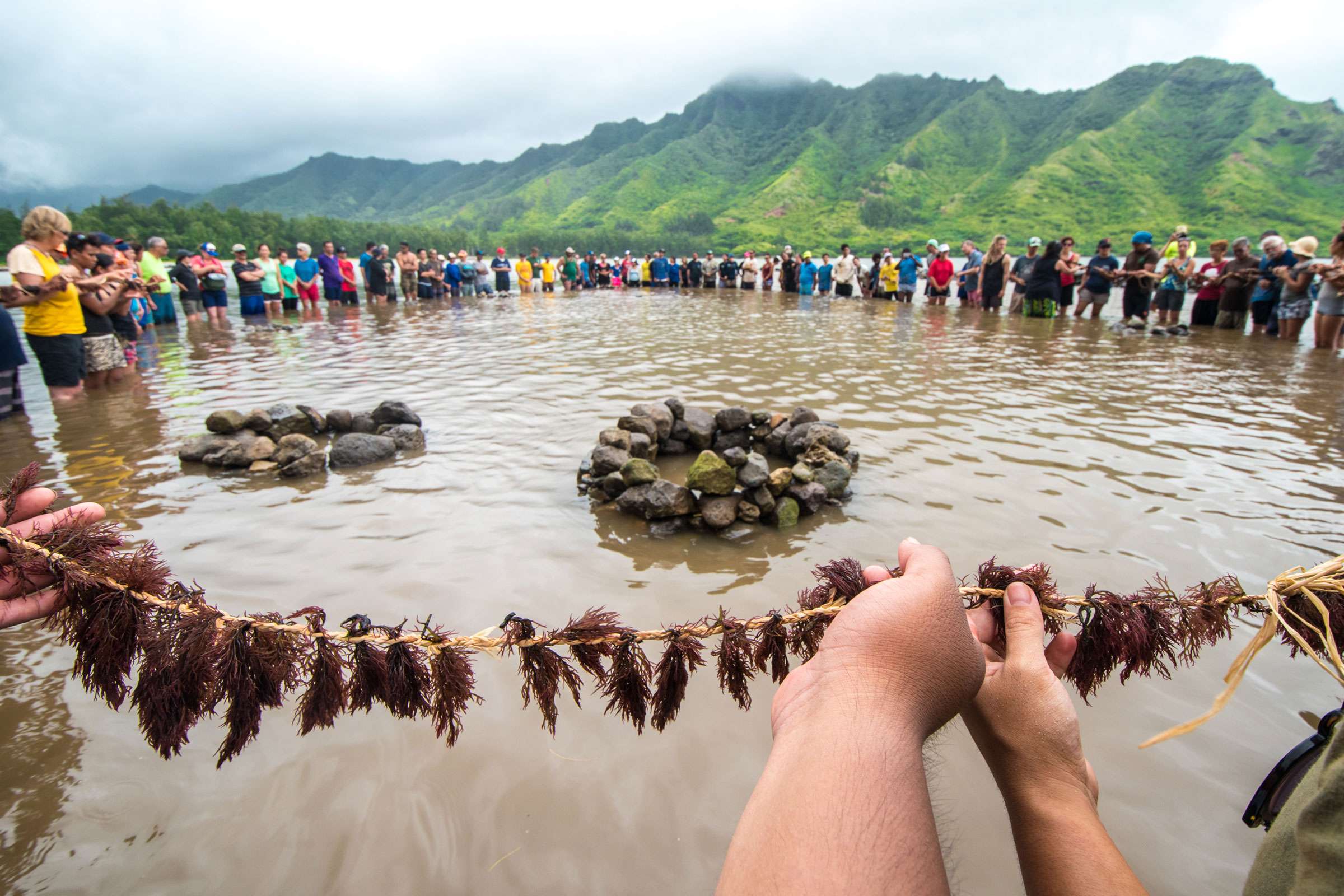 (SEPTEMBER 2016) ~ On the morning of August 30th, 150 volunteers from around the world joined hands on the windward side of O‘ahu for the passing of pohaku (rocks) at Huilua Fishpond in the Ahupua‘a ‘O Kahana. Volunteers represented over thirty countries as well as a mixed plate of local environmental organizations, including Friends of Kahana,  Ho‘āla ‘āina Kūpono, Kua‘āina Ulu ‘Auamo and the Hawai‘i State Department of Land and Natural Resources.  This year, international participants were invited to the E Alu Pū network’s first Global Gathering aimed at building unity among indigenous and place-based grassroots leaders prior to attending the IUCN (International Union for Conservation of Nature) World Conservation Congress in Honolulu. (Photo credit: Bethany Goodrich)

The energy that cloudy morning was palpable − each passing movement, careful and meaningful − as the line chanted “I Kū Mau Mau” in unison. Kia‘i loko (fishpond caretakers) who have worked these lines before ensured the safety of our inexperienced hands, coaching us to hold the pohaku close and pass the heavy stones diagonally.  Each rock zig-zagged its way down the line in a rhythm that eased the effort and deepened our connections to the ‘āina (that which feeds), to past and future, and to each other.

As the last rock reached the edge of the loko i‘a (fishpond), the line broke and volunteers gathered into smaller groups, tasked with constructing rock enclosures called umu (fish houses). Each umu would become its own ecosystem, providing substrate for limu (seaweed) to grow on, giving refuge as well as food to herbivorous pua (baby fish), which in turn attract larger predator fish. This traditional Hawaiian method of resource management has been used for generations to bring fish closer to shore for trapping and subsistence use.

Standing in a circle around the newly constructed umu, volunteers passed around a large lei of pakeleawa‘a (huluhuluwaena) so that each person had a hand in its replanting just as each had a hand in the passing of pohaku. Kahana elders remember when this dark, stringy seaweed once thrived in their bay’s brackish waters.  This and other native limu create the foundation of Hawai‘i’s marine ecosystems; by draping sections of the limu lei around each umu, it not only helps to replenish Kahana’s native limu population but also promotes the return of pua to Huilua. 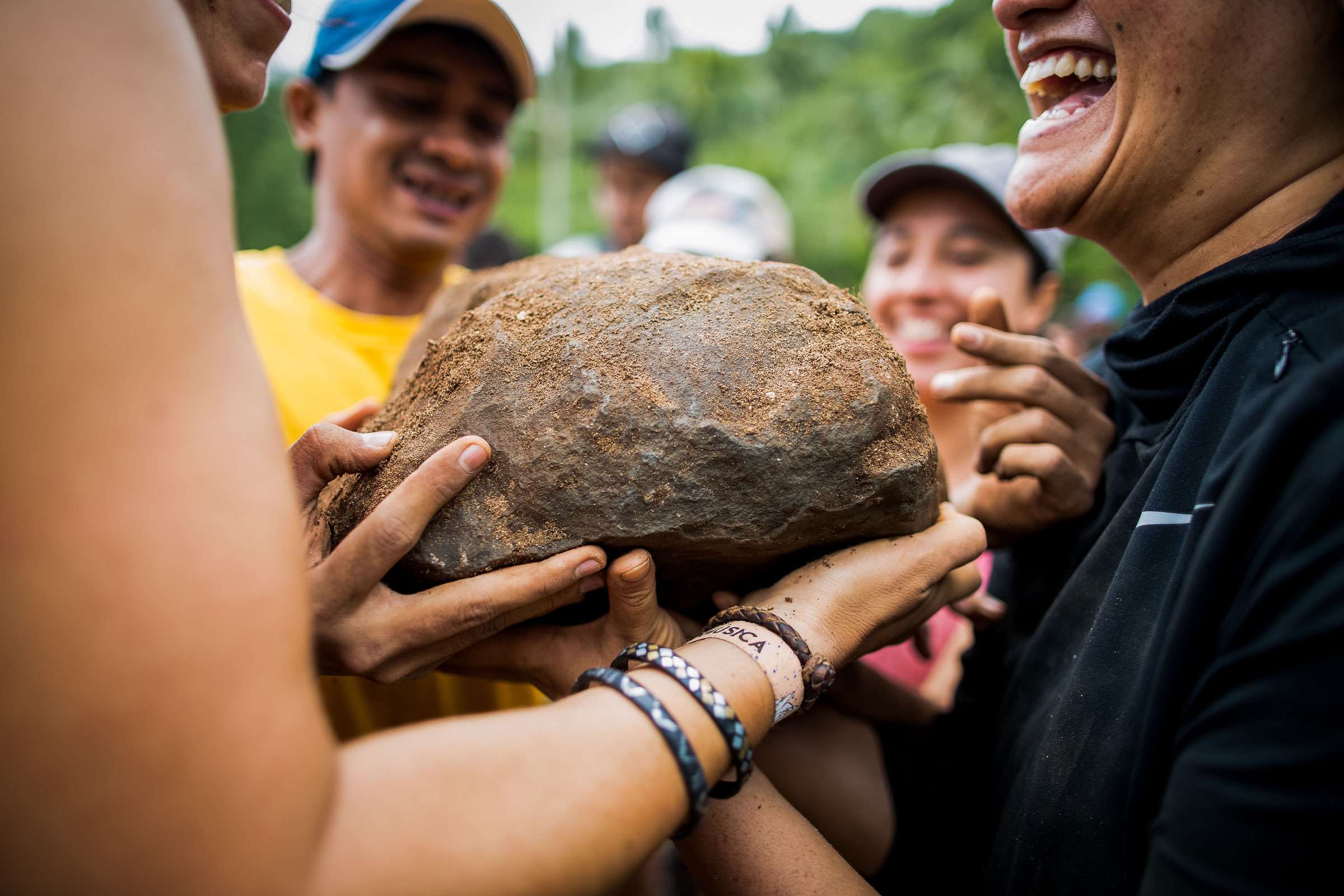 “The fishpond will nurture the children of this island. It is a tangible expression of what happened here”

Wally Ito and Pam Fujii of the ‘Ewa Limu Project shared this importance of limu with the group and told the story of how Queen Lili‘uokalani requested that pakeleawa‘a, her favorite limu, be sent from Lahaina, Maui to her home waters in Waikīkī for her own consumption. Uncle Wally dedicated the moment to the late Uncle Henry Chang Wo Jr. − a founding member of the E Alu Pū network who is fondly remembered for his work with the Limu Hui network and his readiness to share his knowledge of limu with communities throughout Hawai‘i.  To further bless the limu lei event, Luhui Isha and Mati Waiya  of the Chumash First Nations peoples in California shared a story and chant of the island of Limuw (Santa Cruz Island). “Limuw” in the Chumash language means “in the ocean” and resonates with the “limu” in Hawaiian, which refers to any plant dwelling in freshwater or saltwater. It has been said that ancient navigators from Hawai‘i and California may have crossed paths and exchanged knowledge of their shared interest in the marine environment, further connecting our island heritages through oral histories and living language.

“When I came here, I came with burden, I came here with confusion, I came here with−I don’t know what will happen.  But now, I’m going to leave this place with strength and energy which is renewed and fulfilled… I strongly believe that the stones and our strength to carry them [is] the strength in us to carry this common goal to move forward.”

In the closing circle on the last day of the gathering, participants reflected on their shared experiences and offered ideas for moving forward together.  Many recounted the fishpond workday, the strength it took to move the rocks and how this symbolized the incredible force of our collective efforts.  Being in the loko i‘a, touching the pohaku, learning from kūpuna and those who practice and working together toward a vision of abundance−‘āina momona−for generations to come resonated with each of our efforts and goals back home.

After such a deeply moving and inspiring gathering, many participants left reaffirmed in their efforts to protect and nurture the places they mālama and firmly commited to representing the collective voice of indigenous peoples around the planet who share in that labor.  Having returned home to continue on with this work, we are reminded that we are not alone in our efforts and that to move forward together−E Alu Pū−is to do so through meaningful dialogue and supportive action.

Molly Noelani Mamaril graduated from the University of Hawai‘i at Mānoa with an M.S. in Natural Resources and Environmental Management (NREM). She currently works as a freelance writer and Assistant Project Manager at Pono Pacific. Monica Montgomery is a Master’s student in the NREM Department at UH-Mānoa. Her graduate work is focused on community efforts to care for Kahana’s nearshore fishery. 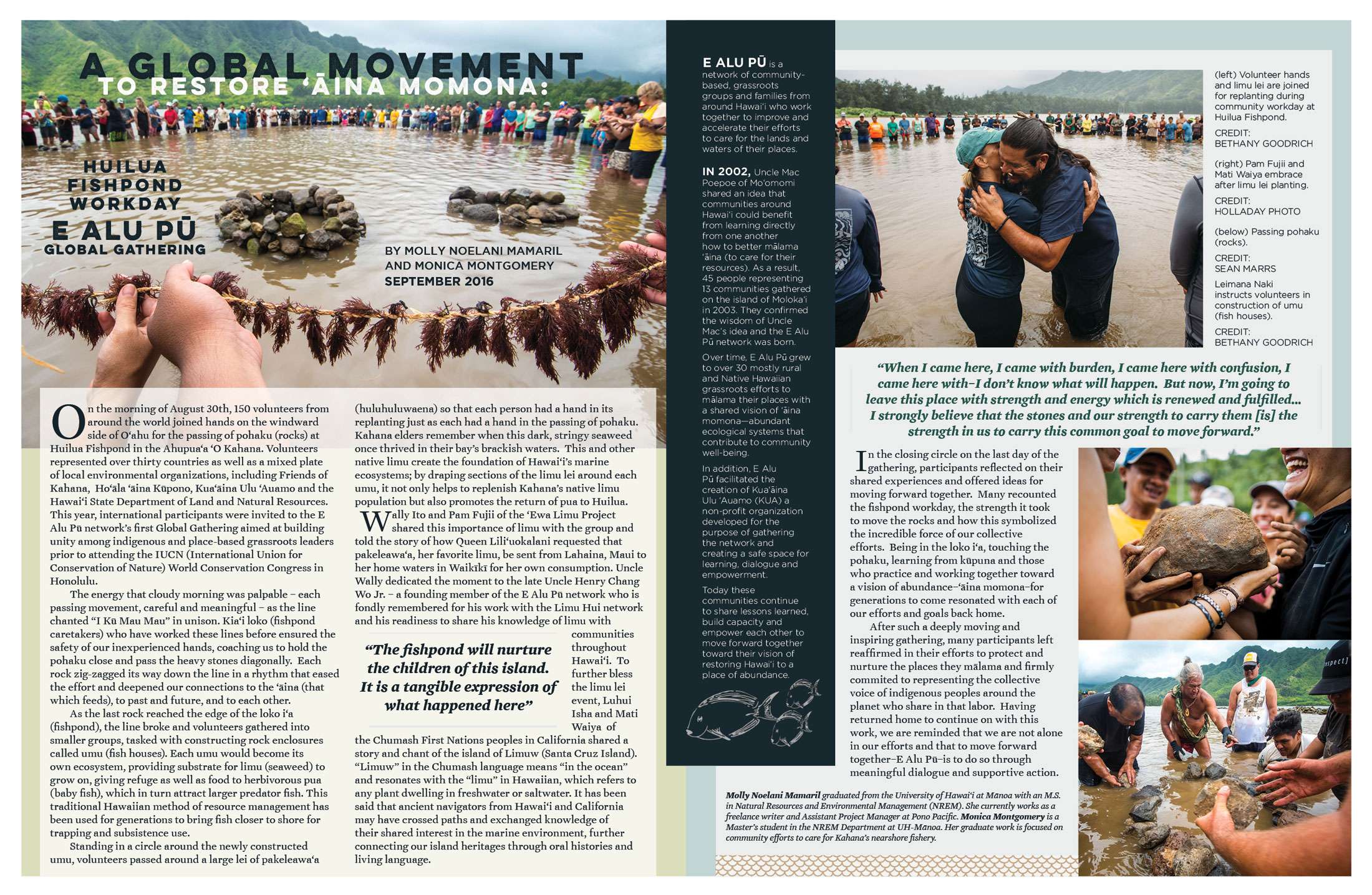